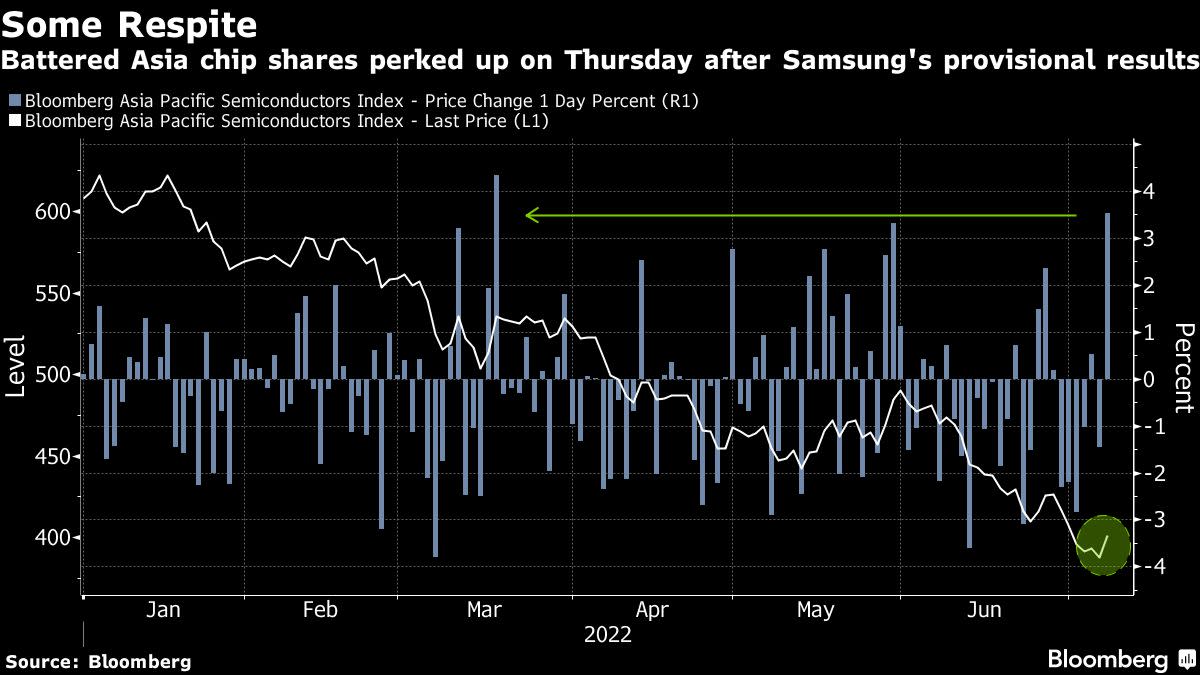 A Stock Trader’s Guide to Navigating the Chip Industry

(Bloomberg) – It’s getting complicated for investors in semiconductor stocks, with last year’s big chip shortage turning into an inventory glut for some companies, and others getting caught up in geopolitics .

The Covid-19 pandemic has caused an unprecedented supply crisis, shutting down semiconductor factories while fueling demand for consumer electronics. Now, some chipmakers are warning of cooling demand for parts used in PCs and smartphones, while automakers continue to struggle with a shortage of certain chips.

Another fly in the ointment is renewed tensions between the United States and China over the Asian nation’s nascent semiconductor industry, with equipment giant ASML Holding NV caught in the middle.

The complicated supply situation, higher interest rates and a possible recession have all contributed to a slump in chip stocks this year. A 37% rout for the Philadelphia Semiconductor Index, or SOX, wiped out about $1.4 trillion in market value.

Here is a breakdown of the sector’s supply dilemma:

Consumer electronics looks the most vulnerable to an oversupply problem, with Micron Technology Inc. warning last week of slowing demand for memory chips used in computers and smartphones. The company will cut spending on new plant and equipment to slow production.

Still, Samsung Electronics Co.’s better-than-expected quarterly revenue rise is a good sign for consumer demand and sparked a rally for battered Asian chipmakers. All eyes will be on computer processor giant Intel Corp. when he publishes his report later this month. Intel is down 28% this year, while Micron is down 38%.

Production of chips used in high-end and mid-range 5G devices has also exceeded demand, according to Counterpoint Research. Most of these smartphone chipsets like application processors, system-on-chip chipsets, and corebands are manufactured by Qualcomm Inc., Apple Inc., MediaTek Inc., and Samsung. Qualcomm is down 31% this year and MediaTek is down 47%.

Chips used in automobiles are still recovering from shortages caused by Covid. General Motors Co. said it expects second-quarter results to suffer due to issues with some components. However, things may improve, with chip delivery times dropping by one day in June.

The bulk of chips used in automotive production come from NXP Semiconductors NV, Infineon Technologies AG, Renesas Electronics Corp., Texas Instruments Inc. and STMicroelectronics NV. These stocks have fallen between 16% and 45% this year.

“Cars are becoming data centers on wheels and electric vehicles use four times as many chips as regular cars,” said John Barr, portfolio manager at Needham Investment Management. “The automotive industry is still short of parts, and I think with the growth of electric vehicles, you’ll continue to see strong growth here.”

So far, demand for high-power processors used in data centers has been more resilient than chips for smartphones and tablets, but it remains fragile.

“We don’t know how stable enterprise demand for data centers is, or what the demand for automotive/industrial chips looks like,” said Jordan Klein, managing director and technology analyst at Mizuho Securities. “These have been strong, and while they could hold up better, we are likely to see order reductions or a slowdown in demand.”

Nvidia Corp., Advanced Micro Devices Inc., Micron, and Intel all make data center chips. Both Nvidia and AMD have fallen nearly 50% this year, wiping out $409 billion from their market value together.

Graphics processing units (GPUs) for artificial intelligence may hold up better than other areas, according to Needham’s Barr. Meta Platforms Inc. will still need five times as many GPUs for its AI initiatives, despite the broader headwinds the company faces. “The overall trend of increasing demand for and use of AI is going to continue unabated,” Barr said.

The complex equipment they rely on is crucial for all chipmakers. That area became harder to navigate this week, after Bloomberg News reported that the United States was pushing the Netherlands to ban ASML from selling some of its tools to China. Shares of the Dutch semiconductor equipment maker have fallen 39% this year.

While analysts have generally agreed that a complete halt to ASML’s export of all deep ultraviolet lithography systems to China is unlikely, geopolitics “can easily scare off investors,” the Degroof analyst said. Michael Roeg.

Any bans or escalating tensions could also hurt peers such as Applied Materials Inc., which derives 25-30% of its sales from China, Bloomberg Intelligence said, while a protracted battle between Washington and Beijing over the equipment could further disrupt fragile supply chains.

The next catalyst for the industry is earnings season, where investors will be watching indices for supply and demand challenges.

Technical table of the day

Asia’s battered chip shares got a reprieve on Thursday after Samsung’s pace raised hopes the sector’s rout may have been overdone. A Bloomberg gauge of the group jumped 3.5%, the most in nearly four months, with Samsung and Taiwan Semiconductor Manufacturing Co. contributing the most to the gain. US peers also rose pre-market.