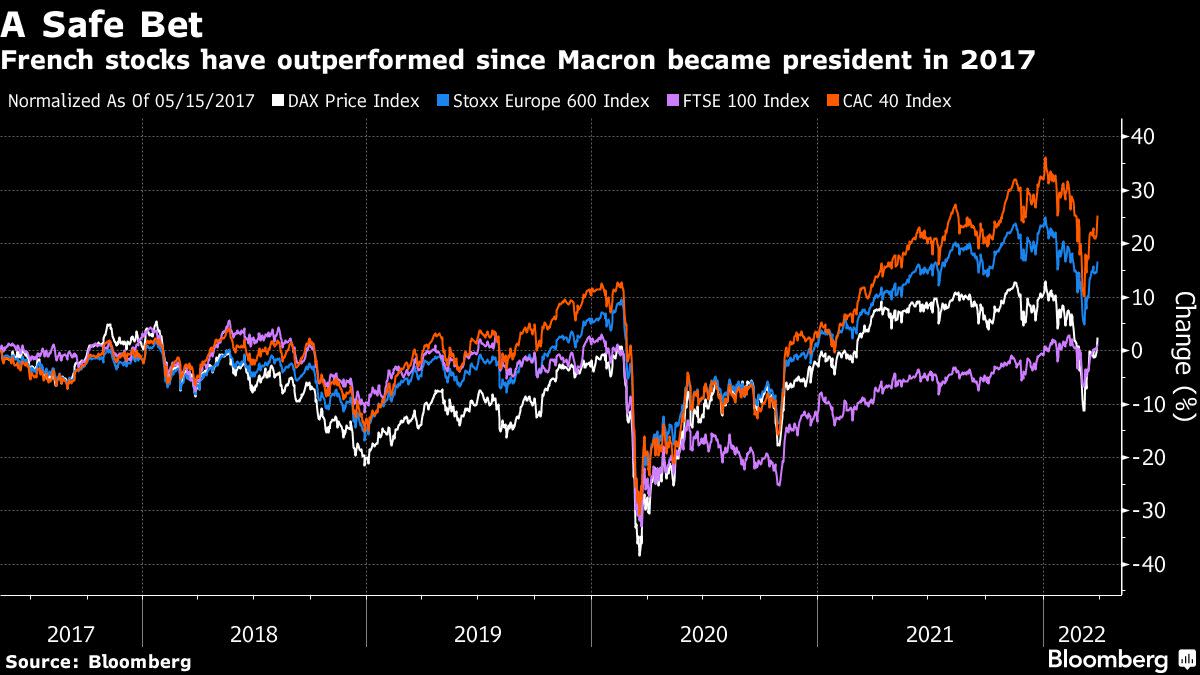 Stock Trader’s Guide to the French Elections: Winners and Losers

(Bloomberg) – French stocks have outperformed other European markets under President Emmanuel Macron, and investors are betting on further gains if he is re-elected this month.

Energy, construction and retail are among the sectors likely to evolve depending on the outcome of the race. As inflation hits record highs, the candidates are all focused on ways to boost household purchasing power.

A week before the first round, the 44-year-old president is leading in polls, which show he is set to face nationalist leader Marine Le Pen in the second round on April 24. It would be a rerun of 2017, although polls show Macron ahead by a narrower margin this time around.

“It would give the markets further relief after a tight start to the year,” Baradez said. “The euro would gain a little against the dollar and spreads would continue to stabilize. It wouldn’t be so easy with Le Pen.

Le Pen and the incumbent are among 12 candidates in the April 10 first round, with far-left candidate Jean-Luc Melenchon, far-right pundit Eric Zemmour and conservative Valérie Pécresse rounding out the top five in the polls.

Here’s our guide to potential winners and losers in the stock market:

All the main candidates, with the exception of Mélenchon, agree on the need to increase nuclear power to strengthen France’s energy independence. Macron has proposed building up to 14 new reactors and said some assets of power company Electricité de France SA should be nationalized. “The issue of energy sovereignty has become crucial and nuclear investments will support EDF and other energy stocks after the election,” said Baradez of IG France.

The other side of the coin is that whoever wins can opt for an additional freeze in consumer electricity tariffs to curb rising prices and avoid a repeat of the yellow vest protests that rocked France at the start. of Macron’s presidency. EDF has lost almost a third of its value since October after Macron forced the utility to sell more electricity at a deep discount to protect households from soaring prices.

Melenchon, the far left candidate, wants an exit from nuclear power, would nationalize EDF and the gas company Engie SA and wants to abolish all gas price increases since 2017.

Macron has promised massive growth in offshore solar and wind power alongside nuclear as part of the transition from fossil fuels. Le Pen opposes wind farms and wants them dismantled if she wins. Engie, Neoen SA and EDF are among the companies that would be affected.

Luxury has become a flagship sector for France under Macron and the dominance of Dior owner LVMH is set to last, especially after the conglomerate’s purchase of US jeweler Tiffany & Co. last year. LVMH CEO Bernard Arnault leaned on the government in the battle against Tiffany and his daughter Delphine is close to Brigitte Macron, who is known to favor Louis Vuitton clothes. Macron has created a stable business environment, cutting taxes for the wealthy and helping retain billionaires like Arnault, who previously applied for Belgian nationality.

A victory for Le Pen could mean “we start talking about tariffs again, like with Trump,” said Baradez of IG France. “This would lead to retaliation and harm exporters, especially luxury. The psychological impact on luxury stocks would be immediate.

LVMH, Kering SA, owner of Gucci, and Hermes International have accounted for nearly 60% of CAC 40 gains since Macron’s election. All three stocks are down 11% or more this year.

‘Unstoppable’ luxury stocks remind some investors of US tech

Investors expect grocer Carrefour SA to be acquired after the elections. The Macron government has blocked the company’s plan to sell itself to Alimentation Couche-Tard Inc. of Canada, saying the pandemic showed the need for large food distributors to remain under national ownership. Talks with another potential buyer, French rival Auchan, stalled last year.

All major contenders pledge to increase defense spending in the wake of Russia’s invasion of Ukraine. Dassault Aviation SA, the maker of Rafale fighter jets, Airbus SE, which produces military and commercial aircraft, and Thales SA, a supplier of missile guidance systems, will all benefit. Le Pen, whose past ties to Vladimir Putin do little to support her, said she would remove France from NATO military command.

BNP Paribas SA and Société Générale SA are among the lenders benefiting from the re-election of Macron, a former investment banker. “Macron is pro-business and the banks would react well if he were re-elected,” said John Plassard, director of Mirabaud & Cie. A victory for Le Pen or Zemmour would likely widen the yield gap between French and German government bonds, which would be “clearly negative” for French asset managers and insurance companies, said Stéphane Monier , investment director at Lombard Odier.

France promises 2.2 billion dollars to strengthen the appeal to tourists

Hotel operators like Accor SA and caterers Elior SA and Sodexo SA would all benefit from a Macron victory, Plassard de Mirabaud believes. Caterers would face higher costs, which they might not be able to fully pass on, due to Le Pen’s pledge that at least 80% of food in cafeterias should come from France. His immigration control plan could hurt industries with labor shortages, such as hospitality and construction, IG France’s Baradez said.